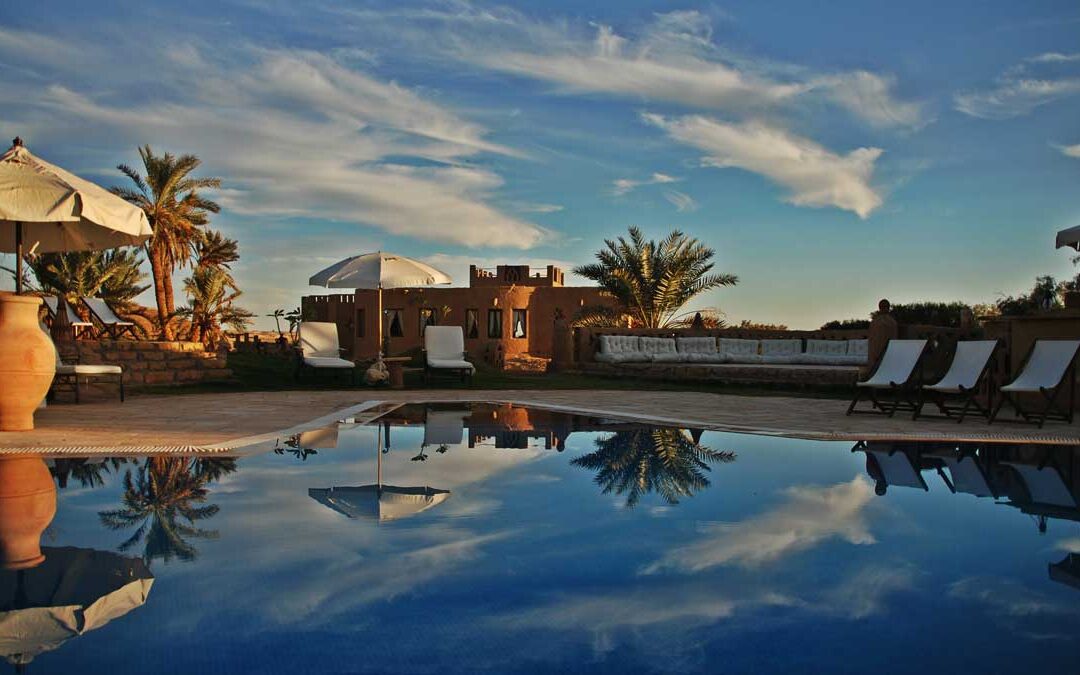 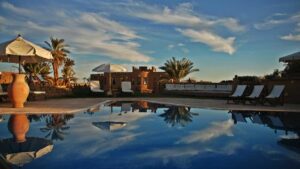 Set in the placid Oasis of Dakhla, award-winning Al Tarfa Desert Sanctuary is an eco friendly lodge with 20 beautiful suites and rooms set in a large private reserve. Owned and managed by Camps & Lodges of Egypt, the  distinctive property offers serenity and luxury that is stemmed from freshness and simplicity. Al Tarfa is a true haven away from the bustling cities and the typical tourist attractions. Come for quality accommodation  and a unique oasis environment, peace and tranquility embraced by mesmerizing deserts. Bring your loved ones to breathtaking landscapes, historical relics, Saharan fortresses and simple life forms.

This is the Sahara without compromise – This is the Romance of Arabia.

Each morning there will be morning Mysore class based on the traditional method of Ashtanga Yoga. All guests will be self-led into the practice under the watchful guidance and supportive instruction of Laruga. This will be an exciting opportunity to become more profoundly grounded and immersed in the practice within the exquisite setting of Egypt. In addition, time will be given to explore the beauty of the natural surroundings in the afternoon.
The evening workshops will be dedicated to all aspects of the Ashtanga yoga methodology including practical techniques and philosophical wisdom in regards to integrating yoga principles into daily life. This is a time to be inspired and more deeply rooted within the true nature of the Self through the context of Ashtanga yoga and all the beauty and insight it entails. This retreat is appropriate for all levels.

“…and here in Dakhla – a secret [Egyptian] oasis at the end of a road less travelled – is a new little beauty. This is isolation for the intrepid traveller, where …[celebrities] come to escape the glare. Al Tarfa pops up like a mirage: an eco lodge surrounded by pinky cliffs, apricot sand-dunes and a sun-baked sky.
… Come here for adventures in an ancient landscape, for the most perfectly preserved Roman relics and Pharaonic temples you’ll clap eyes on. Camel-trek along the horizon, dip in primordial springs and feast on sweet Egyptian cakes. It’s soul-stirring stuff.” – From Tatler Travel Guide 2010, by Issy Von Simson.

Al Tarfa Desert Sanctuary is located in Dakhla Oasis which lies west of Kharga Airport (180km) and is also about 310 km to the southeast of Farafra and 500km west of the Nile (6 hours from Luxor Airport). Dakhla Oasis (Oasi Magna of the ancient times and the threshold to Gilf Kebir National Park) consists of 14 settlements and has a population of about 70,000 people. Dakhla is considered by many to be Egypt’s most beautiful oasis. Being away from the village’s dwellings Al Tarfa maintains its privacy, serenity and distinct appeal. The lodge’s location is superb, with various levels and granting a 360°panoramic view over the breathtaking and lively oasis landscape Which intensely contrasts with the surrounding deserts.

Romance and relaxation are the way of life at Al Tarfa Desert Sanctuary. In addition to slow pace exercises (nature walks, local community experiences and horse-back rides), the surrounding oasis offers a wide range of activities for the more dynamic traveler. You can always join our daily guided trips to startling sites, located within easy travelling distance from the lodge, or tailor make your excursions to the neighboring oases, national parks and protected areas.

“Luxury at Al Tarfa starts with cold, wet towels sprinkled with flower petals laid on a silver tray greeting you every time you return from a trip. And it culminates with your own champagne bar set on the dunes at sunset.” – Aline Kazandjian.

For More Information
and Booking

For Further Information on the Location

We use cookies to ensure that we give you the best experience on our website. If you continue to use this site we will assume that you are happy with it.AcceptPrivacy Policy